Awards and Exhibits received by Lucy Graves-McVicker in the year, 2017:

Awards:  2017 - My painting, "Sole Survivor III"  was accepted into AWS  (an international competition), and because
this is the third time my other paintings have been accepted, I was given the honor of full membership.

The other good news this year, 2017, is that my painting, "Sandy's Fury" was accepted into a national competition of
NSPC&A  (National Society of painters in Casein and acrylic.)

A Short Bio of Lucy Graves-McVicker: 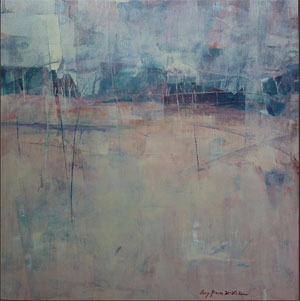 After graduating from Principia College with a BA degree in Fine Art, Lucy Graves McVicker continued her studies at Parsons School of Design, The Brodsky Center at Rutgers University and the Printmaking Council in New Jersey. Since 1990, her artworks have been shown in over 80 exhibitions, 38 of them in juried competitions - both national and state-wise, and awards have been given to her in 13 of these shows including a Gold Medal from the Audubon National juried show in New York, NY and the Bristol -Myers Squibb Purchase Award. She has had numerous one and two person shows in various galleries, including Rider University, and she is at present represented by The Coryell Gallery in Lambertville, New Jersey. She is an active art teacher and juror, and her works are included in numerous public and private collections including Johnson and Johnson, DuPont Corporation, Capital Health System, ADP Corporation, Princeton University, and New Jersey State Council of the Arts.